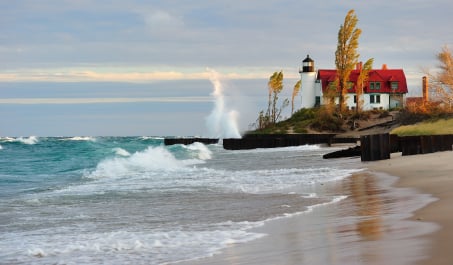 Michigan is also known as the "Great Lakes State and "Wolverine State. Michigan is a great state for retirees and Baby Boomers with the riches of unspoiled nature including the world's longest freshwater coastline, lakes that feel like oceans, shimmering beaches, and miles and miles of cherry orchards. Michigan is known for its cities supported by heavy industry, and its pristine wilderness, home to more than 11,000 lakes. Most people don t have Michigan in mind when they think retirement but there are desirable communities that offer an exciting active lifestyle with low-maintenance homes.

Michigan is the ninth most populous state in the United States. It is located in the Great Lakes Region and is bordered by Wisconsin, Canada, Ohio and Indiana, as well as by four of the five Great Lakes. Michigan has a continental climate with well-defined seasons. It is divided into Upper and Lower Peninsulas by the Straits of Mackinac. The southern and central parts of the Lower Peninsula have a warmer climate with hot summers and cold winters. While the northern part of the Lower Peninsula and the whole Upper Peninsula have a more severe climate with short, warm summers and long, cold winters. There is an average of 30-40 inches of rain and about 30 days of thunderstorms per year.

Michigan is more colorful than most may think and people visit for the activities, water, culture and compassionate people. Active adults love that the state offers small-town charm, rural camaraderie and strong pride.

Michigan is known primarily for its car industry but they are also a leader in many other industrial and processing lines such as prepared cereals, machine tools, airplane parts, refrigerators, hardware and furniture. Michigan produces large amounts of iron, copper, iodine, gypsum, bromine, salt, lime, gravel and cement. Michigan has many forests, which has helped boost the economy resulting in many jobs in wood production, tourism and recreational industries.

Outdoor recreation is popular in the state with activities such as boating, fishing, snowmobiling, hunting, camping and golf. Michigan is home to more than 36,000 miles of streams, 11,000 inland lakes and borders four of the five Great Lakes. Some popular points of interest among active adults and retirees include Sleeping Bear Dunes, Traverse City, Ludington, Bay View, lighthouses, Mackinac Island, Motown Historic Museum, The Henry Ford Museum and Greenfield Village.

You may be amazed to find out that Michigan has one of the best tax deals in the United States for retired people. This is largely due to Michigan s state income tax exemption of private pension income that is $45,120 for singles and $90,240 for those filling a joint return. The overall cost of living is lower in Michigan with a flat rate of 4.35% income tax. The state sales tax is 6% and there is no local or city sales tax. Property tax is appraised at 50% of its true cash value and there is no inheritance tax but there is an estate tax.

Michigan's active adults have access to five hospitals that are nationally ranked and 34 other hospitals met the criteria for strong performance within the state. The state is ranked 36th for overall health.