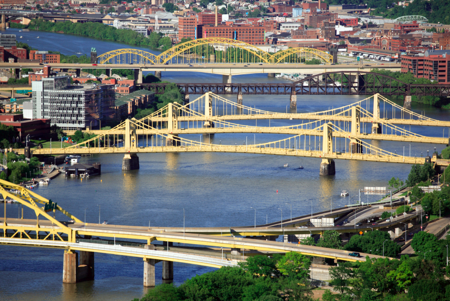 There are many active adult communities in Western Pennsylvania. 55+ homebuyers can find an age-restricted or age-targeted neighborhood that ranges from a 500-home community to a quaint subdivision of less than 50 homes. The majority of age-restricted communities in Western Pennsylvania include low-maintenance single-family and attached homes. Active adults can find a neighborhood that includes resort-style amenities, low-maintenance homes, and a vibrant social calendar. Pennsylvania is a popular destination because of its retirement friendly taxes and generally low cost of living compared to other states in the Northeast.

Active adult communities in Western Pennsylvania experience cold winters and humid summers. Since its location is near Lake Erie, the region sees lake-effect snowfall where snow can reach up to 100 inches per year. Like the rest of the state, the general climate is humid continental where the weather is cooler closer to the mountains.

Pittsburgh, the second-largest city in Pennsylvania, is located within the western region of the state. The Steel City includes 30 skyscrapers, two railways, 300-steel related businesses, and 446 bridges. Those looking to live in an active adult community near Pittsburgh will enjoy plenty of rich history, culture, and entertainment opportunities. The River City Brass Band, Pittsburg Youth Symphony Orchestra, Heinz Hall for the Performing Arts, and Benedum Center all provide many concerts and shows throughout the year. In addition, music fans will appreciate jazz and bluegrass as well other genres from the Pittsburgh Irish and Classical Theatre and the Renaissance and Baroque Society of Pittsburgh.

Those looking for an active adult community near golf will be pleased to know that there are many courses in Western Pennsylvania. 55+ communities in Western PA are located near the Foxburg Country Club, Oakmont Country Club, Laurel Valley Golf Club and the Fox Chapel Golf Club. All of which have hosted numerous professional tournaments like PGA championships, the U.S. Open, U.S. Women s Open, U.S. Amateurs, the Ryder Cup, LPGA Championships, and Seniors Players Championships.

Compared to most of the nation, owning a home within a 55+ community in Western Pennsylvania means experiencing a lower cost of living compared to other Northeastern states. Active adult communities are popular in Pennsylvania because it s extremely tax friendly toward retirees. There is no tax on retirement incomes including pensions, social security, 401Ks, IRAs, etc. Working adults will be pleased to know that the income tax rate is collected at a flat rate of 3.07%.

Active adults and retirees in Western Pennsylvania have access to 45 hospitals in the area, nine of which are top-ranking facilities. Two nationally ranked hospitals are both in Pittsburgh, UPMC-University of Pittsburg Medical Center and Magee-Women s Hospital of UPMC. Other top facilities include Forbes Regional Hospital in Monroeville, Jameson Hospital in New Castle, and UPMC in McKeesport.