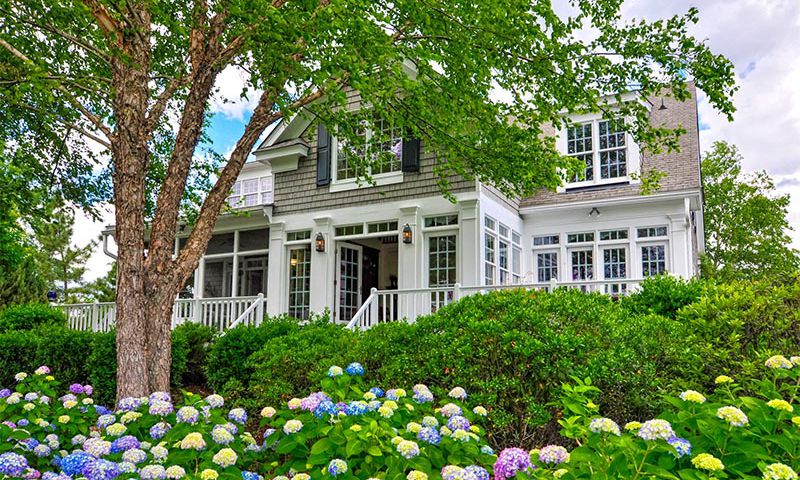 The Governor's Land at Two Rivers is an active lifestyle waterfront community in Williamsburg, Virginia that’s located between the James and Chickahominy Rivers. The community spans 1,400 acres and features 750 single-family homes that are available as both new construction and resale.

Residences within the development have been built by several different builders, giving potential homebuyers a wide array of choices when it comes to the look and feel of their homes. Along with its many homes, the development boasts a wide variety of amenities that include a fitness center, 18-hole championship golf course, marina, private beach, tennis courts, outdoor pools, and walking trails.

Homebuyers looking for homes for sale in Williamsburg, Virginia will love all that The Governor's Land at Two Rivers has to offer.

Residents at The Governor's Land at Two Rivers have access to a clubhouse, fitness center, on-site restaurants and bars, as well as a wine shop.

Outside, The Governor's Land at Two Rivers residents can enjoy an 18-hole championship golf course designed by Tom Fazio. The community is also home to a 100-slip deep water marina, two outdoor pools, and ten miles of walking trails. Homeowners can stay active at a variety of sports courts including basketball, bocce, tennis, and pickleball. Residents also have access to a private beach area.

There are a total of 750 single-family homes available on both a new and resale basis in The Governor's Land at Two Rivers. The luxury homes of the community allow residents to live in a modern and low-maintenance environment while maintaining individual tastes.

The Governor's Land at Two Rivers offers a variety of memberships to both residents and the public. The use of the golf course and the marina depend on which level of membership a resident may have.

Residents of the community enjoy a low-maintenance lifestyle thanks to a homeowners’ association that takes care of all common area maintenance. Homeowners at The Governor's Land at Two Rivers take advantage of their extra free time by pursuing their hobbies or spending time with friends and family. Homeowners will also have plenty of ways to stay social with neighborhoods throughout the year with several organized community events that range from Easter egg hunts and Fourth of July parties.

The Governor's Land at Two Rivers is located in Williamsburg, putting residents in easy reach of daily needs and fun opportunities.

When dining out, restaurants such as Berret’s Seafood Restaurant and Taphouse Grill, Blue Talon Bistro, A Chef’s Kitchen, Dog Street Pub, Fat Canary, Fat Tuna Grill & Oyster House, and Food For Thought can be found nearby. When residents are looking for entertainment options, they’ll find them at Colonial Williamsburg, Busch Gardens, the Williamsburg Tasting Trail, Watermen’s Museum, The Mariner’s Museum and Park, and Riverwalk Landing.

The Governor's Land at Two Rivers residents who want to get outside will find plenty of options close by. Golfers will find multiple courses to play nearby, including the neighborhood’s own Two Rivers Country Club and Williamsburg National Golf Club. There are also multiple greenspaces and parks to choose from, including Chickahominy Riverfront Park, Jamestown Beach Event Park, Powhatan Creek Park and Blueway, and Greensprings Interpretive Trail.

Residents who want to visit nearby metropolitan areas are in luck. The Governor's Land at Two Rivers is a 20-minute drive to downtown Williamsburg, providing easy access to everything the city has to offer. For longer trips, Newport News/Williamsburg International Airport is only 40 minutes away.

Amenities at The Governor's Land at Two Rivers include:

There are plenty of activities available in The Governor's Land at Two Rivers. Here is a sample of some of the clubs, activities and classes offered here.