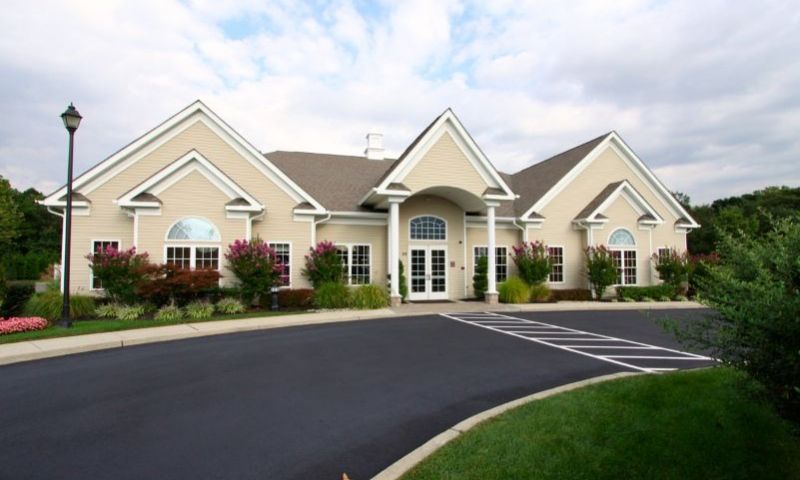 Four Seasons at Forest Meadows is an active adult community in Sicklerville, New Jersey. This K. Hovnanian community is in a suburban location in Gloucester Township in Camden County. Tree-lined streets provide a natural ambiance in this rural setting. Yet, homeowners still have easy access to daily conveniences and vibrant cities, not just in New Jersey but in the surrounding states as well.

This subdivision for adults 55 and better is comprised of 197 single-family ranch-style homes that were constructed between 2003 and 2007. Residents of Four Seasons at Forest Meadows have active social lives and organize plenty of events for neighbors to meet and socialize, creating a terrific sense of community.

Outdoors, residents can get their exercise by playing tennis and bocce ball, go for a swim or simply relax by the outdoor swimming pool on the patio. A putting green, water features, and scenic walking trails further enhance Four Seasons at Forest Meadows, creating several opportunities for active adults to stay engaged.

Four Seasons at Forest Meadows is a small, tight-knit community in a distinct four-season climate with warm, outgoing people. While it is an established neighborhood, newcomers are eagerly embraced into the community. Residents take pleasure in organizing regular day trips to New York City and Atlantic City for cultural enrichment or simply to enjoy a change of scenery. More competitive residents can challenge each other with games of Mah Jongg, pinochle, or bocce ball. Meeting new neighbors is easy with regular happy hours, mystery dinners, and wine and dine events. From open mic events to holiday BBQs to the needle working club, active adults at Four Seasons at Forest Meadows will never lack in things to do.

Four Seasons at Forest Meadows is set in a suburban community, within 15 minutes to major shopping malls. These include Moorestown Mall, Cherry Hill Mall, and Promenade Mall. Golf lovers will be able to pursue their passion at nearby Freeway Golf Course. Sicklerville is also home to a large variety of restaurants that offer different cuisines.

Located near several major highways, residents are within 30 minutes to Philadelphia, and one hour to Atlantic City, Ocean City, Princeton and Trenton. For an even bigger change of scenery, New York City can be reached within two hours. Camden County Airport in nearby Berlin offers convenient intermediate travel. For long distance travel in and out of the country, Philadelphia International Airport is only 45 minutes away. Four Seasons at Forests Meadows in Sicklerville, New Jersey is the perfect active adult community in Camden County that offers entertainment both near and far.

There are plenty of activities available in Four Seasons at Forest Meadows. Here is a sample of some of the clubs, activities and classes offered here.

The ranch-style homes in Four Seasons at Forest Meadows were built by K. Hovnanian between 2003 and 2007. Residences have two to three bedrooms, two bathrooms, and an attached two-car garage. Homes range in size from 1,872 to 2,021 square feet of living space. Among the ten models at Four Seasons at Forest Meadows, several of the floor plans have full basements. Interiors include nine-foot ceilings, foyers, eat-in kitchens, central air, gas heat, and natural gas hot water. Please Note: Not all floor plans are available at this time.