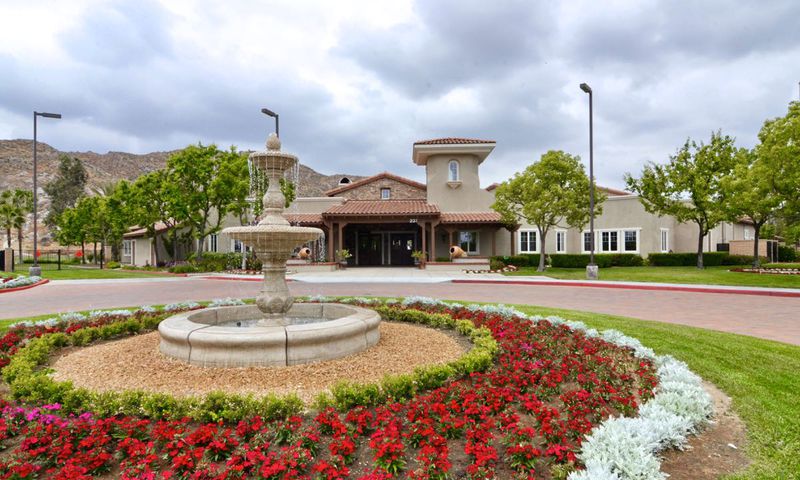 Four Seasons at Hemet is a 1,106-home active adult community in the heart of Southern California. Residents enjoy breathtaking views of the surrounding San Jacinto Mountains and impeccably maintained fairways of the Hemet Golf Club. Everything from mountains, lakes, deserts and beaches are accessible in an hour.

K Hovnanian (KHOV) started Four Seasons at Hemet in 2003 and completed building new homes in 2011. Like most of KHOV's age-restricted communities, Four Seasons at Hemet is a mid-sized active adult community that caters to 55+ adults who want the available amenities of a large-scale resort but in a smaller, more close-knit setting.

Within the gates of Four Seasons at Hemet residents are greeted with a magnificent lineup of world-class amenities. Amenities in The Lodge, Four Seasons at Hemet's 14,859 square-foot clubhouse, include a ballroom, bistro, salon, BBQ area, an arts and crafts room, library, card room, computer room, movie theater and billiards room. Residents can stay in shape at the fitness center or relax in one of the covered patios. The Lodge also includes a conference room for large gatherings and a dining room with a kitchen for events or entertaining your neighbors. Enjoy the year-round Southern California climate with The Lodge's outdoor amenities that include tennis, bocce ball and pickleball courts and a resort-style pool and spa area.

The beautiful Hemet Golf Club is strategically woven through Four Seasons at Hemet to provide enviable fairway views from many of the homes in the community. Thoughtfully designed in every way, the natural beauty of the surrounding terrain has been seamlessly incorporated into the course layout with panoramic views of the San Jacinto Mountains from every hole. This Schmidt-Curley designed course boasts a challenging design that is exciting for both seasoned experts and weekend novices.

The homes at Four Seasons at Hemet offer a myriad of choices to fit the tastes of the most discerning buyers. The builder has sold all new construction homes but there is a continually changing lineup of pre-owned resale homes on the market. There are 12 single-family floor plans to choose from that range in size from 1,444 to nearly 2,800 square feet.

All homes feature single-level living with a two-car garage in a variety of exterior choices and styles. Most homes are outfitted with finely appointed options and available upgrades such as granite countertops and tile or hardwood flooring. Casitas and two-car garages are available on some of the larger home plans.

In addition to the world-class amenities, the lifestyle in Four Seasons at Hemet is unparalleled. A full-time community activities director is continually organizing exciting social activities, events and classes. Plus, with over two-dozen clubs and interest groups, it is easy to find neighbors who share your passions and make new friends.

At The Lodge, the resort-caliber amenity center, residents are provided with numerous opportunities to explore their interests or socialize with the other residents. Make your exercise routine a chance to meet your neighbors by joining an aqua aerobics class, the yoga group, or the exercise club. Card players of all stripes will find a club to join whether its bridge, hand and foot, or canasta. With frequent outings, holiday parties, and interest groups of all kinds, staying active and social at Four Seasons at Hemet is as easy as walking to the clubhouse.

At the heart of the community is The Lodge, a 14,859 square foot clubhouse. The Lodge is the central location for social and physical activities.

Hemet Golf Club is an 18-hole golf course that weaves through the community grounds.

There are plenty of activities available in Four Seasons at Hemet. Here is a sample of some of the clubs, activities and classes offered here.

The Legends Collection's single-family homes offer very desirable front porches and side courtyards. All homes include rear-load two-car garages, which makes for very inviting curb appeal on the front of the homes. The Legends were constructed between 2003 and 2011 and are available on a resale-only basis.

The Invitationals Collection is ideal for homebuyers who require more space but still want a reasonably priced home. These spacious homes include large great rooms.

The Championships Collection homes are designed for the those who seek the finest upgrades and ample space. These homes are ideal for entertaining and offer plenty of room for out-of-town guests.

Get the details in The 62+ Loan™ Home Buyer's Guide.

Get the details in The 62+ Loan™ Home Buyer's Guide.