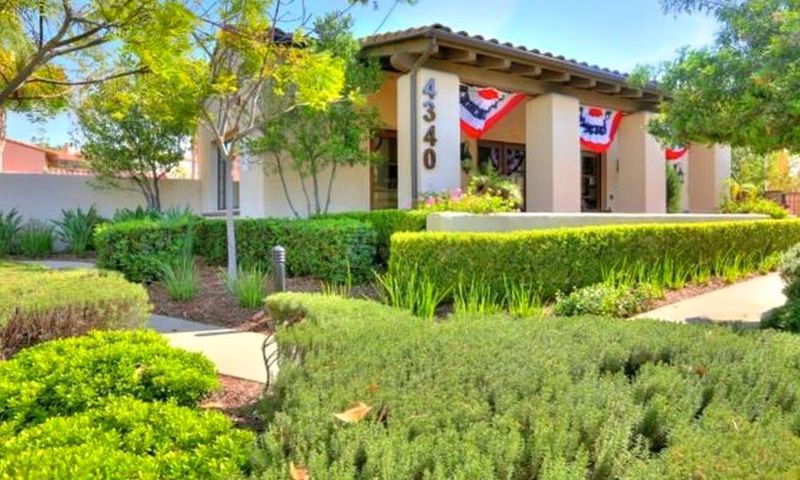 A beautiful clubhouse stands as the neighborhood's social gathering point. Indoors, a meeting room and billiards table are perfect for a leisurely afternoon with friends. A library is also available for relaxing with a good book. A catering kitchen is available for making a meal for a community get-together.

Outdoors, Shady Grove at Dos Lagos has a resort-style pool and spa for taking a dip on a sunny day. A patio is ideal for socializing with neighbors and an outdoor fireplace is a great option for chilly nights. Simply relax in the cabanas or explore your community with the walking and biking trails that weave throughout the master-planned community.

Taylor Morrison developed 112 attached homes within Shady Grove at Dos Lagos. These low-maintenance homes range in size from approximately 913 to 1,878 square feet and have one to three bedrooms, one-and-a-half to three bathrooms, and an attached garage. These homes boast private patios and decks, large walk-in closets, ceramic tiles, wood flooring, recessed lighting, and some have an additional loft space.

Living within Shady Grove at Dos Lagos means taking advantage of all that the beautiful community has to offer. Neighbors can be seen taking casual strolls around their picturesque community or attending gatherings in the clubhouse. Shady Grove at Dos Lagos exudes the Southern California lifestyle with a laid-back atmosphere and friendly neighbors. Residents will also enjoy more time to do as they please thanks to the homeowners' association that takes care of exterior maintenance.

Shady Grove at Dos Lagos is located in Corona, California. Homeowners are directly across the street from the Shops at Dos Lagos which consists of several shops for all your needs, including clothing stores, Trader Joe's, a brewery, movie theater, and casual restaurants. Interstate 15 is conveniently down the street, making travel around the region a breeze. When your next destination is farther, LA/Ontario International Airport is just over 20 miles away.

Dos Lagos Golf Course is also just behind the community, while the area also has the Eagle Glen Golf Club as well as the Champions Club at The Retreat. Outdoor enthusiasts will delight in the community's proximity to Santiago Peak, Lake Mathews, and Chino Hills State Park. Shady Oaks at Dos Lagos is a beautiful 55+ community with an unbeatable location for retirement in Southern California.

There are plenty of activities available in Shady Grove at Dos Lagos. Here is a sample of some of the clubs, activities and classes offered here.

Taylor Morrison developed 112 attached homes within Shady Grove at Dos Lagos. These low-maintenance homes range in size from approximately 913 to 1,878 square feet and have one to three bedrooms, one-and-a-half to three bathrooms, and an attached garage. These homes boast private patios and decks, large walk-in closets, ceramic tiles, wood flooring, recessed lighting, while some have an additional loft space. Please Note: Floor plans are not available at this time.